By epapsiou - July 25, 2022
I have been meaning to post more here but just have not been able to. I think it is the fear of not coming close to what Dave did here. I will have to cross that bridge soon. In the meantime, please enjoy these last few reviews that Dave was working on. They were written in 2021. Some were posted and then taken off the blog. These are the reviews of the Yellowstone Parfums line. I heard about this line in 2021. The smell description and artwork reminded me of Dave. I thought he was the person behind it and so I got a sample set.  It turned out that, while he was not the nose behind it, he was involved. Helping his friend with this venture. Unfortunately, I don't think the Yellowstone Parfums are in business anymore.
Post a Comment
Read more 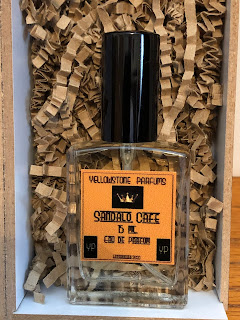 Sandalwood, Cedarwood, Cinnamon, Coffee, Myrrh, Amber Vanilla. The first thing I have to say about this particular fragrance pertains to the Coffee note. I've owned multiple releases of MPG's Santal Noble, over the years and a few had different renditions of a coffee note implemented. I love Santal Noble and still have a bottle of the original release. It's like a Holy Grail frag to me. Enter Sandalo Cafe. This version of a coffee note is intriguing to say the least. It's immediate straight out of the bottle and to me, it smells like a Cinnamonized Mocha Latte layered with Sandalwood. It's one of those eccentric openings that I keep sniffing. The amazing thing for me is that this "opening" stays around for quite awhile. It's like Sandalo Cafe has 2 accords instead of 3 and from the initial spray, you get what I just described until the dry down commences to reveal a pleasant woody Van-Amber. Even as the Sandalwood note dissipates during the course of
Post a Comment
Read more 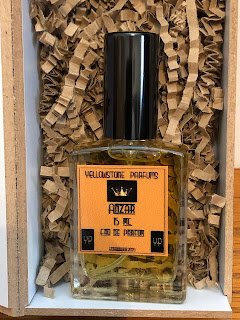 Orange, Bergamot, Rose, Jasmine, Vetiver, Castoreum, Oud, Agarwood, Saffron, Birch Tar, Cedarwood, Amber, Labdanum, Benzoin, Leather. Anzar's opening is a cacophony of notes. I detect Oud, Agar, Citrus, Woods and smoke from Birch Tar. Within minutes, there's a leathery element attaching itself to the accord. To me, this is masculine all the way and this aroma is what stays with me for almost the entire wearing. I say almost because at the end, Amber makes an appearance due to the other players finally dissipating. In the past 10 years, I've owned numerous Ouds from Niche and Designer alike. The two I have really liked were niche releases ( Oud for Love by TDC and Mona's original Oud before her untimely passing ).  The designer Ouds were okay, but nothing special and I sold them off. Anzar wears more like a Niche Oud, but it's nothing like the aforementioned, luxury ouds ( as I like to call them). Anzar is like a masculine cousin from a rough neighborhood. Now, do
2 comments
Read more 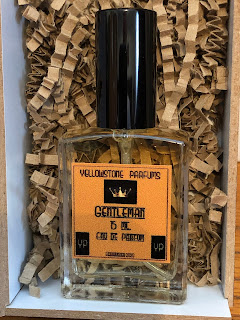 Bergamot, Green Notes, Spices, Floral Accord, Woods, Oakmoss Absolute, Patchouli, Smoke, Vetiver. Gentleman surprised me in the sense that I "expected" a Patchouli driven vehicle due to my ingrained connection to Givenchy's vintage release of the same name. Not so Grasshoppa. The opening of Yellowstone's Gentleman is a herbaceous, green accord that manages to stick around for basically the life of the scent. It's more along the lines of Homme de Gres, but denser and longer lasting. The top accord, on my skin, is very durable and lasts much longer than most. You can detect the other players underneath supporting this fresh green aura, yet during my wearings, they never truly conquer the opening. It's as if Gentleman blows out of the bottle fully developed. That's fine by me because I like this accord and the fragrance has good longevity. The listed "Green Notes", Oakmoss and Vetiver are the dominant DNA players in Gentleman. Together, they are her
Post a Comment
Read more 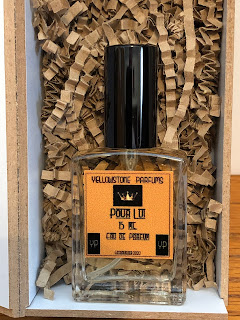 Lavender, Atlas Cedar, Sandalwood, Musks, Amber, Vanilla Bean, Benzoin, Tolu Balsam. Two things come to my mind when I spray this on my skin. The first is that this is a strong top accord in terms of projection. The second thing is that this reminds me of a particular release from a certain designer house back in the 1980's ( I'll mention no names ), but this isn't a replica by any means. It shares DNA and to be honest, I like this better. The combination of Lavender with an outspoken Vanilla note is a love it or hate it marriage. I've always either liked it or was indifferent to it, depending upon the overall scent. Pour Lui seems to have captured the right amounts of listed notes to settle on this beast of an opening. It calms down within 5 minutes and retains a friendly posture that has good longevity and just smells good. It's very uncomplicated and I think that was the point. It's fully developed right out of the chute. The only things that changes on my
Post a Comment
Read more 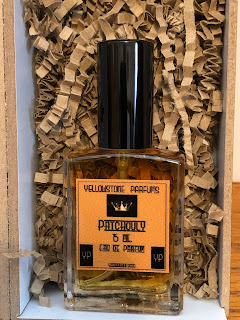 Dark Patchouli, Woods, Citrus, Amber, Labdanum, Vanilla Bean, Musk, Incense, Castoreum. I'm a self avowed sucker for Patchouli. I pretty much like them all and the ones I presently own and no longer have consisted of varying interpretations of the note. I admit to finding redeeming qualities in basically all of them. Yellowstone Patchouly is no exception. There's a noticeable Orange note in the opening salvo and even beyond. I like this combination. This particular citrus note is married to the Patchouli and I find it well integrated. For the first 5 minutes or so, it's all about a smooth Patchouli infused with orange. After the 5 minute mark, I can begin to smell the mild resin and Vanilla making their appearance. This is not loud or boisterous. Even the opening volley has manners. I say that thinking of Bois 1920 Real Patchouly, who barnstorms the wearer with their opening accord. Make no mistake, I still own Real Patchouly and actually like it more now than when I bought
6 comments
Read more 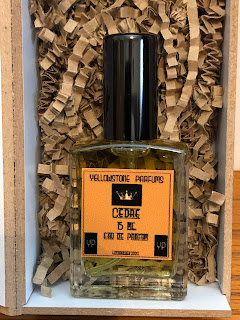 Atlas Cedarwood, Musk, Floral Note, Fruit Note, Vetiver, Oakmoss Absolute. Yellowstone Parfums is new and they have 8 fragrances listed on their site as of now. I'm going to systematically review half of them because they feature predominant notes I've always gravitated to. Cedarwood is one of those notes, however, as much as I like it, the one problem I've had with a few I've owned (for example Tumulte PH and Gucci ) is that they smell great, but have poor longevity on my skin.  Cedre opens with a bracing shot of Cedarwood and some sort of anonymous smelling heart note. Perhaps it's the fruit listed, but it compliments the in-your-face woods. I like it and I like that this rendition of the featured note is front and center, not to mention rough around the edges. Nothing here to smooth out the opening for the first 5 minutes. The Cedar note stays center stage for about 10 minutes on my skin before softening enough to permit the accompanying notes to augment the he
Post a Comment
Read more
More posts